Think Your Parent May Have Dementia?

Think your parent may have dementia? What to look for.

When a parent or older relative begins to show signs of forgetfulness, it can be tempting to immediately jump to your own conclusion: dementia. And while it’s certainly a possible diagnosis, it’s important to recognize the symptoms that differentiate it from other possibilities.

While the term can be a common catch-all for a variety of medical conditions, dementia is not a single disease. Like the term heart disease, dementia covers a wide range of specific medical conditions, including Alzheimer’s disease, which are caused by abnormal brain changes which trigger a decline in thinking skills, or cognitive abilities, that are severe enough to impair daily life and independent function. They also affect behavior, feelings, and relationships.

Alzheimer’s disease accounts for 60 to 80 percent of cases, with vascular dementia caused by microscopic bleeding and blood vessel blockage in the brain, a close second. Other conditions that can cause symptoms of dementia, including some that are reversible, include thyroid problems and vitamin deficiencies.

Signs of dementia can vary greatly based on the individual, and the pace of its progress also varies widely. Some common early warnings signs include:

Of course, these are just a few possible signs, and nothing can substitute for the professional opinion of your loved one’s physician. While there is no single test for dementia, doctors can still diagnose Alzheimer’s and other types of dementia based on a careful medical history, a physical examination, laboratory tests, and the characteristic changes in thinking, day-to-day function and behavior associated with each type.

If you or someone you know is experiencing memory difficulties or other changes in thinking skills, don’t ignore them. See a doctor soon to determine the cause, particularly since a professional evaluation may detect a treatable condition. If symptoms suggest dementia, early diagnosis will allow for maximum benefit from available treatments and time to plan for the future, including any special arrangements for long term care.

If your parent or loved one has advanced to the stage that living alone is no longer possible, it’s important to evaluate and select a facility that provides both a welcoming environment and expert memory care. Facilities such as those managed by American Health Corporation –including three locations in Alabama – offer skilled nursing healthcare nearby and offer active restorative programs to help residents maintain their skills and abilities to live as independently as possible.

Contact the nursing home in your area today for more information or to schedule a guided tour: 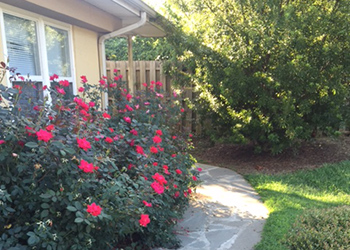